Nothing like a little corner time to give a gal the chance to reflect on the paddling she just got and the paddling she is about to get.
Posted by Our Bottoms Burn at Monday, March 30, 2009 1 comment:

The activity level of the Blogs I follow has been very low the last three weeks. Ditto here. It must be something going around? Spring pollen?

The spankings continue here. Nothing special, you have read all about it before. Something new or different will happen soon. It always does.

Every time, Becall gets that gleam in her eyes to paddle me OTK, I develop a deeper respect for that position. I can take forceful pops with serious paddles when I am standing and bent over. When OTK, a half dozen pops with a hairbrush have me wiggling around.

I hope you enjoy this image as much as I do. It is well posed.

I have written about adult spanking as punishment several times. In fact, one of the first posts was “Don’t Bring Mom Into This” in August of 2007. Perhaps this will be my final thoughts on the matter?

Almost certainly, the most popular F/M Blog is Spanked Hubby. He usually omits the reason for his frequent chastisements, but he declares that he deserves them and that he encourages his wife to spank him harder to facilitate his learning to behave. He also acknowledges that he frequently has an erection when he is punished, but an intense session momentarily softens his ardor. He confesses that making up, including sex, normally follows punishment. 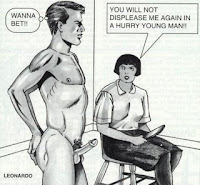 My view of the futility of adult spanking as punishment

Male or female, in both cases we have adults acting out to elicit a punishment normally reserved for children which is followed by making up. They like to be spanked, but need the “cover” of punishment in order for it to be acceptable to them and to their mate.

Western culture is far more accepting of M/F spanking for inappropriate behavior than F/M spanking. Perhaps western culture values women for acting submissive, even if they are in fact dominate. This creates an imbalance in supply and demand. I think there are about as many men, as women, who are fond of being spanked. However, women who grew up acting submissive and seeking a dominate male to look after them find it takes a lot of mind twisting to reverse roles and spank a man. Most will not consider it. They feel it would take something from themselves.

My Bottom Smarts recently listed some new spanking Blogs. I looked at My Thoughts on Spanking & Discipline and learned how the how the "Formal Thank You" helps a HOH relationship. That’s right readers, she advocates a blow job, as a non-sexual act of course, as an appropriate way of expressing thanks after punishment.

All this to say, we all enjoy spanking, but it is a varied activity with colossal differences in tastes. Some I will never understand.

Email ThisBlogThis!Share to TwitterShare to FacebookShare to Pinterest
Labels: Adult spanking as discipline

Comments have dropped to near zero since I suggested those that make comments without a Blogger ID to please consider getting an ID. We will continue on.

The woman's hair in motion suggests her efforts with the leather strap are effective; as does the redness in the man's bottom. I am guessing the women are not pro's. 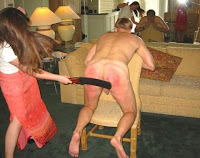 The decor reminds me of panhandle Florida condo's.

This has everything to do with spanking