It's rare when Becall writes. Savor it

I would like to tell you about the last two paddling sessions from a girl’s point of view. Bogey had been needing a good paddling and I had been wanting to take care of that situation in a way that would please me. I really like to give him OTK, because the bottom is just where it is needed. First, I used the batten on his legs. The batten is an interesting implement, a love/hate relationship. For me, nothing turns me on like the batten applied to my inner thighs - just right.

After finishing with the batten, then I moved on to the “principal’s paddle”. It’s thick and looks like something a high school principal would have used back in the days when that was permitted. After a good session with that, I was ready for the fun part, Bogey over my knee and the beautiful Myrtlewood paddle in my hand. For those that don’t know about Myrtlewood, it’s a beautifully grained wood and is quite dense. How can something so beautiful, sting so much! Bogie got the paddling he so richly needed.

The next day, he began to get a strong itch to paddle me. I don’t know why, because I am such a good girl. His itch continued to build and two days later, before shower, I pulled out a selection of panties for him to pick for me to wear for the itch.

This was a delicious session. There was buildup, which is important to me. He used the leather paddles, the holey paddle that is my favorite. By this time, my endorphins are kicking in, so he brings out the Myrtlewood paddle. After several paddle pops, I am a happy girl and his itch is gone. 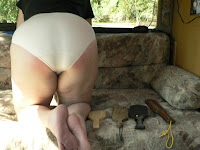 Even rarer is a picture of Becall. This is for Carly, who also travels in a motorhome. The Myrtlewood is second from the left
Posted by Our Bottoms Burn at Tuesday, February 24, 2009 3 comments:

I got paddled and I liked it

We have not been recording our paddle sessions for the last month or so. Most of them have been joint action sessions; Becall acquired an affinity for them last year. Like all things, this will change, but for now, it is working for both of us.

Yesterday was different. I was feeling really in need of the paddle. I asked her for a hard paddling and she gave me one I will remember. She started with two-dozen licks on my thighs with the batten. The session was in the morning. The stripes persisted until bedtime. Next came a dozen or so on my bare bottom with the principal’s paddle. Becall put maximum body English into each swat and I had some difficulty staying in my bent over position.

Next came a new combination. She was going to use the Myrtlewood OTK. This paddle packs more sting than a swarm of hornets and she was going to use it after the judicious application of a heavy paddle. Yeeks! As regular readers know, paddling me over her lap is her favorite and my least fav position. I don’t like to disappoint my much-loved paddler, so without dissent I arranged myself over her lap, resolute in mind to take my licks with decorum. I don’t think she had gotten to six licks before my resolve vanished and I was imploring her for mercy. As typical, she ignored me and persisted to paddle me without stoppage. I continued to try to take my licks without much success. When she thought I was about to “crush her kneecap” she stopped. I know she would have liked to continue, but she has never been one to tussle or hold me down.

I was on fire and felt well paddled. We then engaged in other some congenial activities. 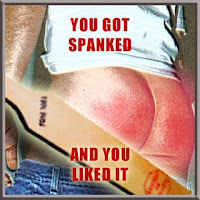 Bogey and Becall are not our real names. But you knew that. When I started the Blog I wanted to hide our identity from spankers we knew. I wanted to start fresh with the ability to express our true feelings about what we enjoyed. While our names are false, everything else is accurate.

We hope more of our readers will take the time to start a Blog identity for comments. We understand it will be just as much a deception in identity as Bogey and Becall, but it would be a step up from Anonymous. Think about it. We hope you will share a few real details behind the necessary deception.

Spanking the 18 year old Becall as “Slim”in “To Have and Have Not” would be a slice of heaven.
Posted by Our Bottoms Burn at Sunday, February 22, 2009 No comments:

Big things, like mountains, do not change very quickly. Little things, in the human world, change speedily. Hemlines go up and down; well they did until most women adopted pants. I grew up with women in girdles and slips. Seen any of those lately? In 1955, it was thought that soon a new Chevrolet would cost more than $2,000. Maybe next year you will not be able to buy a new Chevrolet?

I also grew up with pubic hair. That too has changed as this Playboy cartoon depicts.

The spankings continue. We just have not been inspired to write about them. Maybe next week?

Coming to you today a few keys north of Cayo Weso, where the temperature is a pleasant 79.
Posted by Our Bottoms Burn at Sunday, February 15, 2009 1 comment:

The Trouble, if any, With Switching

I realize it is problematical to uncover a spanking partner that you connect with, no matter how you label yourself. Pure serendipity brought Becall and I together. I am not whining here, just reveling a fact that is new to me.

We have wondered why it has always been so difficult for us to find couples like us, couples who switch with each other. After posting to a few kinky hookup sites and getting zero responses, I am starting to appreciate how exceptional (or odd if you prefer) our capability really is.

Most submissives/bottoms just can't tolerate the thought of their dominants/tops submitting to them, even "just in play". They fear that it will create a lack of respect issue.

Most other switch couples, find others to switch with. In our view, this could lead to relationships issues.

Perhaps, we are able to switch with each other only because we do not have any ownership issues. No Master, HOH, Dominate labels.
Posted by Our Bottoms Burn at Saturday, February 07, 2009 10 comments:

When I am swinging the paddle, I position myself a few inches forward of the target, pull back and swing UP aiming for the meaty section. I imagine the paddle going through the target. In the last few inches of travel, I snap the paddle forward with my wrist. I listen for pleasing sound of the paddle making contact and a vocal exclamation from the target. One of life's simple pleasures.

When I am bending over, I expect the same from Becall.