A Reader's Most Memorable Spanking 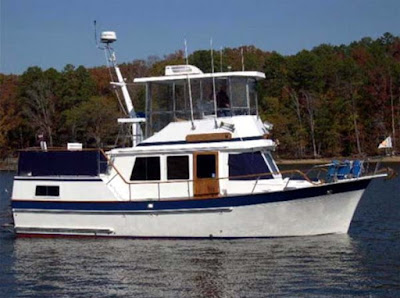 One August about 30 years ago, Wendy and I had a 35’ trawler chartered on the Bay. We had chartered this boat in previous years and we were due to anchor for the night in our most favorite anchorage on the entire Bay that evening.

We arrived at the anchorage about 3:00 in the afternoon and set our anchor back in the center of the almost round and very private cove.  Surrounded by trees on three sides and open to the main body of the river on the remaining side; there is but one house across the river that can even see our boat. The treed sides of the cove open onto corn fields with no houses in sight anywhere.  Pleasure boat traffic on the river was sporadic as some fellow cruisers headed on up the river to a much more popular anchorage.

We had been to this cove before and it afforded a significant level of privacy especially after dark; much to Wendy’s liking, as she finds outdoor sex particularly exciting and enjoyable.

It was blazing hot and we decided a swim was needed to cool off.  Once in the water, it was not very long before Wendy was groping inside of my swimsuit having already shed and tossed her suit onto the swim platform.  She hauled out and was sitting naked on the swim platform when a small boat of fishermen rounded a bend in the river just in time to get a good look before they were noticed by us.  Wendy made a hasty entry back into the water as the fishermen laughed and waved – what can you do? – waving back was really the only option……..

I teasingly told her that flashing the fishermen was very naughty.  She responded by saying that I was right and that maybe she should be spanked for her brazenness.

We retired to the cabin where I proceeded to spank her already bare fanny to a pale pink with my hand. Wendy said she had been very naughty and deserved more spanking; I obliged using a paddle which we had brought along. Having turned her bottom a much brighter shade of pink we retired to the master stateroom for other more gentle activities.

Afterward, Wendy playfully smacked my bottom and I told her, “Later”.

Emerging from the cabin, we noted with dismay that another cruising boat had anchored across the river and appeared to be planning to spend the night. I could hear the other couple talking on their boat and knew that they would certainly hear any outdoor paddling activities. This was going to spoil my plans of enjoying an open air paddling and outdoor sex after sundown.  I could tell that Wendy was also disappointed with their appearance. I needed a plan and it did not take long to formulate.

I invented some excuse for the trip and hopped into our inflatable dinghy and rowed the short distance to the small sandy beach at one edge of the cove while Wendy worked on a light dinner.  Once on shore, I went in search of a location and the appropriate tools.  It did not take me long to find a suitable downed tree and, reverting to my childhood, prepare several switches – virtually silent implements but plenty stingy!

Sipping on some wine after dinner, I suggested to Wendy that I had been just as naughty as she had been that afternoon and should also be spanked.  She heartily agreed but commented that we would have to wait due to the presence of the other boat; that she did not want them to hear my paddling.  I told her that there would not be any noise and that everything needed was already waiting in on the beach.

“S-o-o-o-o-o, what should I wear to spank my naked husband on the beach?”, she purred.

“Something easy to remove.” was my answer. I knew she was “all in” and that just added to my excitement level.

The level of the wine bottle and darkness both fell.  Wendy went into the cabin and returned wearing a long loose garment which she calls a mumu and announced it was time for me to be spanked – that I should go get myself and the dinghy ready for our trip to the beach. It was still hot and I opted for just a pair of cut-offs knowing that she planned for me to be naked very soon anyway.

While I rowed to the beach she commented that I was “in for it” as her fanny was still stinging from her afternoon paddling – that she was ready to deliver.  I reminded her that she had asked for more, “and you delivered; but now it’s your turn.”

We beached the dinghy and I lead her to the downed tree and handed her the switches.  She had never used a switch before but quickly grasped the concept.

“Strip.” came her command.  I quickly dropped my pants and when I looked up, she had already shed her mumu.  I was fully erect and she hugged and kissed me while holding my erection with one hand. She said, “This comes later but, for right now, I have a switching to deliver to your naughty little fanny.  Bend over the log.”  I bent over the log and she laid into my bottom with the switch.

Having never either given or received a switching herself, she was a bit more forceful than she intended (I think).  I was squirming as she delivered about 30 strokes; she seemed to be enjoying herself immensely and as Bacall would say, I was Mr. Tough Fanny for her that night.  I was very well striped and as hot as a firecracker, both front and back by the time she stopped and draped her nude body over mine.

She whispered that she could not stand to wait until we got back to the boat – that she wanted to have sex outdoors in the moonlight – no surprise there! We made our way back to the dinghy where I laid down in the bottom of the boat; she pushed off and promptly impaled herself on me.  We drifted in the cove with her providing just enough rowing to keep us offshore until we both came.

The next morning she was shocked and upset to see that some of my fanny stripes were still visible.  I told her not to worry as they would fade as the day progressed.  They did, but she never switched me again as firmly as she did that night.  We have long since settled on using various paddles and the occasional belt as our spanking implements.