Brilliant Idea of the Week - Since Progressives refuse to accept and oppose anything Trump supports, let's get Trump to start professing an interest in all sorts of bad socialist ideas. Perhaps this will steer Progressives away from some of their own worst proposals. 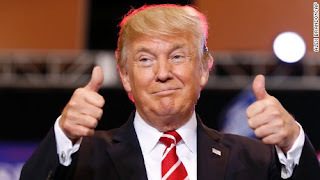 Trump's speech was conciliatory. Yet the Dem's were instructed by the leadership to sit on their hands. Some have no social graces or a modicum of goodwill. There is no chance of negotiating with such folks. It looks like the country will continue to be run by the majority party.

“So tonight I am extending an open hand to work with members of both parties, Democrats and Republicans, to protect our citizens, of every background, color, and creed,” Mr. Trump declared in one of several pitches for cooperation across the aisle. Pictures below show how those remarks were received.

Some of the negative highlights from the speech:

Luis Gutierrez, the illegal alien-loving congressman from Illinois triggered by chants of "USA" fled the House chamber retreated to a safe space.

ABC lost its mind slinging mud at the President for delivering a “divisive,” “gloomy,” and “sad speech” that did nothing to “unify” the country.

Contrast with BHO, President Trump used the word “I” 29 times in his speech, while using “we” 129 times. Another communal word used often by the president: “our,” which he used 104 times.

Pelosi maintained a frown the whole time.  Some say she was chewing a Tide pod.

This might be funny if it was not so serious.

A Look Ahead at the Post-Trump GOP
By Bobby Jindal

Barack Obama famously aspired to be transformative like Ronald Reagan rather than incremental like Bill Clinton. What about Donald Trump? His friends and foes alike seem to share only the conviction that he changes everything. But it’s worth considering how lasting his legacy will prove to be. What will happen to the conservative populist movement that he masterfully discerned and harnessed—but did not create—after he is done?

Contrary to conventional wisdom, the real danger with Mr. Trump is that he may end up
changing little. This is not to detract from his real accomplishments in undoing much of the Obama regulatory regime, enacting pro-growth corporate tax reform, and appointing judges who recognize they are not legislators. But Mr. Trump is clearly a one-man show, sticking his finger in the dike to hold back liberalism’s flood, while both parties seemingly learn nothing and try to wait him out.

It is easy to lose sight of the substance and be distracted by the disruptive style, the aura of celebrity, the in-your-face tweets, and the unapologetic combative demeanor. While the new judges represent permanent change, and the lower tax rates may last a while, most of the executive orders and regulatory actions can be easily reversed. Mr. Trump is a man, not a movement; he embodies executive strength, not a philosophy. When his time in office is up, he may leave behind millions of frustrated, voiceless people facing a status quo government and two limp, self-serving political parties eager to return to what they were, which wasn’t much.

Trump voters elected a president, causing them to think they had won the revolution. They hadn’t. Their power is one man, and he has an expiration date. It’s not clear that the GOP, as a party, has learned anything. The Republican elite’s desire for self-preservation, along with its recognition of the obvious populist conservative wave, has resulted in a temporary truce within the party. But the GOP will not be a populist conservative party as long as the current congressional leadership remains in place. These leaders would rather lead a shrinking GOP to contain and crush the populist uprising.

The Democratic Party is in no better shape. Consider what Mario Cuomo said about it in 1984: “And in between is the heart of our constituency—the middle class, the people not rich enough to be worry-free, but not poor enough to be on welfare. The middle class—those people who work for a living because they have to, not because some psychiatrist told them it was a convenient way to fill the interval between birth and eternity.”

Cuomo’s Democratic “heart” is today a description of the people who elected Mr. Trump. It a far cry from Bernie Sanders and his call for “Medicare for all,” or the progressive notion of a guaranteed universal income, or the obsession with identity politics over pocketbook issues. If the Republicans have become the party of big business, the Democrats have become the party of big government, and their idea of bipartisan compromise is to marry these behemoths.

The Trump movement should and can be bigger than him. Now that elite Democrats have
renounced the blue-collar working-class voters who supported them as recently as 2012,
Republicans must learn to consolidate and build on that base. The next Republican presidential nominee after Mr. Trump will have a fighting shot at bringing home the people who like lower taxes and dead terrorists but bristle at his crude behavior.

Mr. Trump has both a high floor and a low ceiling, and it is up to the Republican Party to figure out how to maintain the former while shattering the latter. One clue is to remember Bob Dole’s admonition in 1996 that anyone who believes “that we are not open to citizens of every race and religion” could find the exits, “which are clearly marked.” We used to be the party of limitless possibility. The moment immediately after Trump is the one that counts. It is possible that it took him to broaden us and that our subsequent existence will depend on his disappearance.

Where does all this leave us? We need to take over and reinvent the GOP. Mr. Trump won’t be the man to do it. We should create a more populist—Trumpian—bottom-up GOP that loves freedom and flies the biggest American flag in history, shouting that American values and institutions are better than everybody else’s and essential to the future.

Democrats are the past. They worship at the altar of identity politics, which means they believe in everything and nothing. We believe in one shared exceptional American identity, open to all who embrace it. I’ll bet millions of Americans would sign up for that, but not for anything less.

Mr. Jindal served as governor of Louisiana, 2008-16, and was a candidate for Republican presidential nomination in 2016.

In a Lighter Vein - News from the UK

A group of feminists is so angry about . . . something or other that they’re beating each other up. Literally. They call themselves Femme Feral, a “queer, femme fighting force” (whatever that means), and they want to “destroy the conservative government” and “bring down the patriarchy” by beating the living daylights out of one another. Because, apparently, the best way to protest things you disagree with is to put on really ugly underwear, paint your face to look like a three-year-old did your makeup, and throw your friends on the floor.

Femme Feral was founded by British artist and Ph.D. researcher Phoebe Patey-Ferguson as a way to channel her rage over Britain voting to leave the European Union

To partisans, Hillary Clinton and Mr. Trump are a lying, cheating murderer and a crazy, impulsive, lying, racist, homophobic, sexist narcissist. That’s a big gap. Can it be bridged?

Posted by Our Bottoms Burn at Saturday, February 03, 2018