The 1960 movie Time Traveler show some scary parallels between the Eloi the current crop of young liberals. 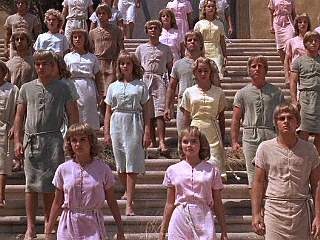 They’re so dumb and docile that they don’t even know they’re cattle. It would be sad if they weren’t so dangerous to the future of the species.

The premise  ...the Time Traveller tests his device with a journey that takes him to 802,701 A.D., where he meets the Eloi, a society of small, elegant, childlike adults. They live in small communities within large and futuristic yet slowly deteriorating buildings, doing no work and having a fruit diet. His efforts to communicate with them are hampered by their lack of curiosity or discipline, and he speculates that they are a peaceful communist society, the result of humanity conquering nature with technology, and subsequently evolving to adapt to an environment in which strength and intellect are no longer advantageous to survival.

One of my favorite commentators picks up the comparison here.
Posted by Our Bottoms Burn at Saturday, November 18, 2017