The Look Of The Left

Cursing pols, screeching students, and intolerant abortion advocates have become the face of the left. 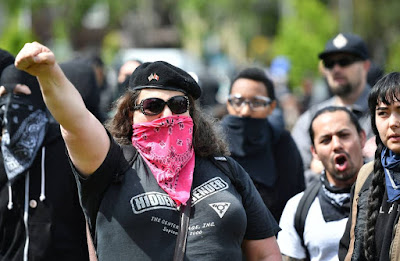 While the Freedom Caucuses, the Tuesday Groups, the Ted Cruzes and Tom Cottons are obstructing Trump, the progressive left has been having a very public nervous breakdown.

The new head of the Democratic National Committee, Tom Perez, performs unhinged diatribes. He told an audience in Las Vegas that “Trump doesn’t give a sh— about health care.” In a Maine speech, “They call it a skinny budget. I call it a sh—y budget.” In Newark, he said Republicans “don’t give a sh— about people.”

Perez says pro-lifers have no place in the party. Oh well, having thrown out God at the 2012 convention, this is small potatoes. Stepping back it looks like the Salem witch trials.

I thought Mr. Trump was supposed to be the loudmouth vulgarian who swears in public. They are aping what they profess to hate. They excoriated him for lowering the bar.

And they’re doing it because they have nothing else—not a plan, not a program, not a philosophy that can be uttered.

Trump may not be lucky in all of his decisions or staffers, or in his own immaturities and dramas. But he’s lucky in his main foes.

Both D's and R's claim the high ground and each fears the other. There seems to be no chance for compromise. The division is now as wide as that between Sunni and Shiites. It’s poisonous. The D's are calling for a scorched earth policy. There must be a way out, but I don’t have the vision to see it.

I think many of the left are well-meaning, but let emotion erode logic. Perhaps they should strive for clarity of thought in lieu of unfocused passion.


I break it down this way. About 50% of voters have some sort of compass that defines their views. They are divided about even, both making up about 25% of voters. They could be Alinskyites, dyed blue Marxists, etc. My point being they have a "formal" POV. We are the sort of conservatives that reject the notion of a living Constitution and when all is said, we just want to be left alone. We don't care to impose our values on anyone and we sure don't want anyone telling us how to we should attempt to achieve Life, Liberty and the Pursuit of Happiness.

The other 50% of voters lack a compass, they swing in the breeze.