Trump was not our pick. In fact, there was no one running that we had any real taste for. Considering the alternative, we are OK with Trump.

I have thought for a month what I wanted to say about Trump. An excerpt from an interview of Camila Paglia says it better than I could.

From the anti-feminist feminist:
Paglia was not surprised by the election results. “I felt the Trump victory coming for a long time,” she told me. Writing last spring, she’d called Trump “raw, crude and uninformed” but also “smart, intuitive and a quick study”; she praised his “bumptious exuberance and slashing humor” (and took some pleasure in watching him fluster the GOP). Speaking two weeks into his administration, she sounded altogether less troubled by the president than any other self-declared feminist I’d encountered since Inauguration Day: “He is supported by half the country, hello! And also, this ethically indefensible excuse that all Trump voters are racist, sexist, misogynistic, and all that — American democracy cannot proceed like this, with this reviling half the country.”

We like most of his cabinet appointments. We fully support a return to the rule of law. We disagree with him on trade. We wish him well in cutting through the bureaucracy, but that will be some heavy lifting.

We snicker when libtards make fun of his hair. Really? Is that all they have? I think it all a part of the Trump Derangement Syndrome.

It may not be the case, but it seems women are unhinged about Trump than men. No rational reasons are given. Just fear and loathing.

This is supposed to demean Trump. Well, who the hell wants someone griping and bitching all the time? Not me. If that's your definition of misogynistic, well color me one. 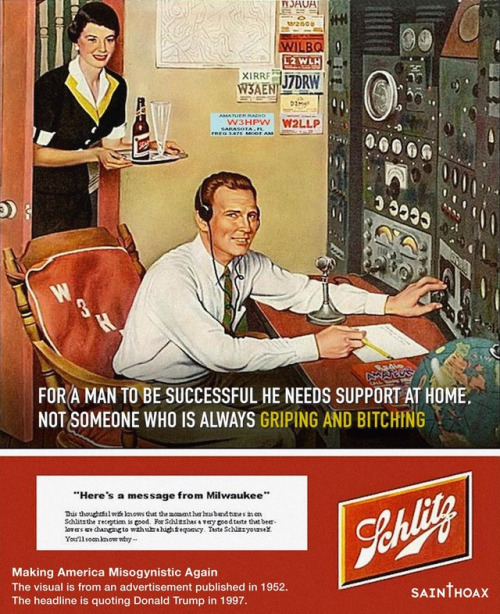