Another from the vault written by the Divine Miss E 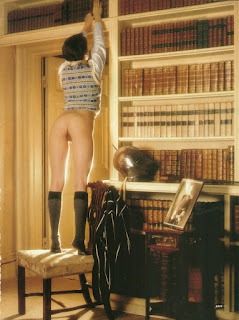 She was silly and flippant as she complied with his order. Leaning
forward, she placed her hands on the wall and thrust her bottom out pertly,
while knowing he wanted her ass. She felt powerful and desirable. It had been
so long since they had played this game. She glanced back at him, but his
face was somber and intent. She wanted his attention and wiggled her ass at
him and made a joke. "Stop it. Now. You forget yourself." She responded to
the note of impatience and annoyance in his voice by turning away and tossing
her head. He saw her resistance and knew he would overcome her; that she
would submit to him again.

He lowered her panties and felt her stiffen her resolve. She pulled away
from his hand as he stroked her air-prickled skin. She would learn control.
"My dear, today you will be paddled quite soundly. You will submit to me and
obey me." She remained silent and refused to respond. "Very well." He drew
the paddle back and brought it down hard. She jumped and cried out, then
stood to face him. "That was too hard!" "Resume your position. The first
lesson you will appreciate is that I will paddle you as hard and as long as I
like. You will demonstrate your understanding of this principle by
maintaining your position and thanking me for each stroke." He was pleased to
see her attempt to hide the inner struggle of submission. Hesitating for a
moment, she stoically turned and again leaned to receive his paddle. Again
the paddle fell firmly. Her hands strained against the wall, and her mouth
tightened in pain, but she didn't move and in a few moments she whispered
"Thank you, Sir". He smiled to himself and was relieved that she had decided
to obey. Next he tapped her lightly, "Are you trying to pull away from the
paddle?" She arched her back and lifted her bottom. "No, Sir. Please give
me the good paddling I need." A few more strokes followed, not as harsh, but
she had to struggle to maintain her composure.

He put the paddle down and saw her sag with relief. He reached between
her legs and gently pushed his fingers into her wetness. She moaned and
pulled away. He slapped her ass hard. "You will not move; I will do whatever
I want with you. And I better not hear a sound out of you either." He began
to tease her again, moving up to her clit. She was hot and again tried to
twist away from him as he brought her close to coming. "What did I tell you?"

"I can't help it, you are making me too hot. I can't be quiet or hold
still." "Can't or won't?" He picked up the paddle and lay three blistering
strokes on her. He placed the nipple clips on her breasts and then began to
fondle her again. This time she panted and whimpered, but did not retreat
from his touch. He sunk his fingers deep into her ass, and was gratified that
she offered no resistance. "I'm going to fuck your ass now, and I expect your
complete cooperation. Is that clear?" "Yes, Sir. Please fuck me now." She
shivered as he pushed into her, and his hands circled her waist to steady
her. "Now ride it." She hesitated a moment as he jammed his cock to the
hilt, and then she swayed back and forth, taking and releasing his full
length. At last they came together in a shudder, and he felt her legs tremble
as she tried to remain in position. Gently he lay her on the bed. They both
lay quietly, no sounds except the deep breaths of recovery.

He raised her to stand before him. "Hand me the paddle." She brought it
to him and wordlessly resumed her position against the wall.
Posted by Our Bottoms Burn at Wednesday, April 20, 2016