The Katzenjammer Kids was a long running comic featuring Hans and Fritz, twins who rebelled against authority, particularly in the form of their mother, Mama. The main plot of the strip was Hans and Fritz would pull a prank or trick on one of the adults which resulted in their being hunted down and given a spanking in the end panel. The comic died when political correctness became the vogue and spanking of kids was banned. 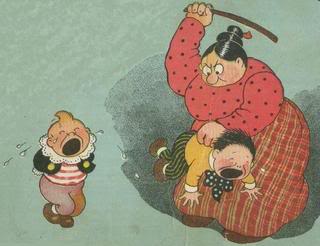 We are traveling. Making sounds in the forest, etc.
Posts may be erratic.