There are many differences between men and women, but I am pondering if the reluctance of women to spank men is cultural or “in the DNA”. Of course, there are men who are reluctant to spank women. So it’s not strictly a F/M thing. But, women are much more resistant to spanking men than the other way around.

Female sexual aggression has never been very common in western culture. Though it’s seems to be  more common in the last two decades, there is still room for equality - if that is a direction women want to take. There are men who want women in control.

I don’t think I have ever read a story or blog written by a women about spanking a man for mutual pleasure. [I discount those written by men posing as women] Do you know of any?

There are exceptions, but it just does not seem to be in the “DNA” of women to be the aggressor, the dominate one. I am ignoring the instances where the woman is intoxicated and comes on verbally or physically strong.  I am focused on women assuming the dominate role in spanking scene. The once in awhile variety, not a lifestyle. Call it bedroom dominance. Perhaps there is complete equality outside the bedroom door, but inside she sometimes likes to take control for her own pleasure. Other times, she quite content to be “dominated”.

Some possible reasons women are not dominate include:

Another reason women may be reluctant is that so many men truly want to be submissive all the time. The man is not interested in switching. AND, spanking is not the only thing they want, they want to be humiliated, denied orgasm, have their cocks locked up and a lot of other things done to them that make me squirm. I think these men make it difficult for those that just enjoy a paddling to be accepted. Maybe it’s men who don’t know how to approach a woman to spank them?

I know there are women who get off on hurting and humiliating men. I sure am not talking about them. I am wondering how many women there are who can assume the dominate role over a man and spank him in a way she knows he will enjoy and at the same time look forward to it and relish her role. I really doubt many woman have ever thought this

My wife and I have been paddling each other since we met. We switch. I am happy on either side of the paddle. While she gets satisfaction from giving me what I want and she delights in hearing the paddle crack on me, she is rarely really dominate. For instance, I know that I have to control my reaction to the paddling or else she may decide that she is really hurting me and ease up. She sees that as love.

That said, she has on a few occasions paddled men and women to settle a beef she had with them. That tells me that she has a basic level of dominance in her and that when provoked it will come out. A few times I have said something like “Is that all you have?” and then wished I had kept my masochist mouth shut.

I have tried to play with a few women who said they liked to switch. Only one delivered. The others had no idea how to use a paddle, and proved it, for instance, by hitting me on the side so that I had to stop the scene right there.

When I spank a women and I endeavor to take her exactly where she needs to go, I get a top’s high when she tells me afterwards of her happy landing. Those moments of cuddling and intimate verbal expression last for days. I wonder if some women ever feel that way after spanking a guy? I mean women are quite confident in showing off their skills in giving a BJ and hearing how good they were. If they got similar feedback could they feel just as good about paddling a guy?

I am curious about the female take on this.

How do you approach paddling a man? What do you get out of it?

Why do you avoid spanking men?

I generally pan captioned pictures, but this one works for this article. 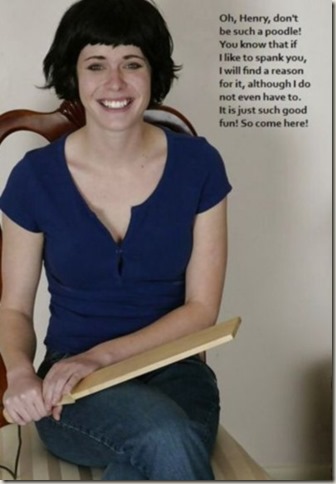