The air smelled of lilacs. It was the first warm glorious day of a long waited Spring. The students at Arcadia High had lots of things on their minds, none of them academic today. It was Thursday before break. The twins had always been high-spirited. Good kids, but always pushing limits. They had gotten a new convertible for their last birthday.  Most of it paid for by their grand parents, but what they had saved also went into the purchase. It sparkled in the sunlight and proved irresistible to the twins to sneak out there with their friends during third period study hall. 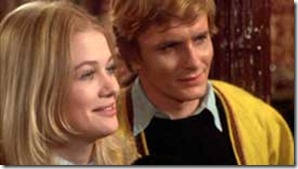 Mark and Cathy were popular in their class. Both were attractive and both were protective of the other. It had always been that way. They shared secrets and got along with each other as few brothers and sisters do. Perhaps, it was the twin thing.

They did not often get into trouble, but when they did, they were confidant their Mom would not hesitate to use the the paddle that was always on display in the den bookshelf. Their Mother was an administrator in the school district adjoining theirs. That was her permanent  position. However, this semester, she had a temporary transfer to the twins school district since the administrator at Arcadia  was on maternity leave and her assistant had mono.

Their Mother brought her paddle with her to Arcadia High. It was the same type that was on the bookshelf at home. Both were bought at the same time from the school supply store used by all schools in the river area west of the city. White Oak. 14 inches long. Three inches wide and 3/8 inch thick. It delivered a powerful sting through clothes. It was a terror on the bare bottom as the twins well knew.

They knew better, but when study hall teacher was distracted, they slipped out the back door with their respective boy and girl friends and made it to the parking lot without incident. Or so they thought. Mr. McGregor was at the window of his classroom. His students were taking an exam and he was dividing his time between proctor duties and wishing he was outside when he saw the foursome get into the red convertible. Everyone at the school knew the car and who it belonged to. He waited until the last exam paper was on his desk, before he walked to the school office to report what he had seen.

It was only a few minutes later that the intercom crackled to life with “Will the following students report to the office” followed by four names. Mark and Cathy were in different classrooms, but both knew they had been caught. As each of the four arrived at the office the receptionist had them sit in the wooden chairs along the wall. They fidgeted and cast furtive looks at each other. After an eternity, Mrs. Hardin’s door opened and she motioned them into her office. 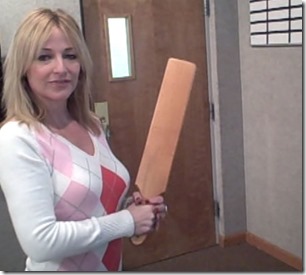 It was short and sweet.  There was no denying they had cut class and the punishment was suspension or five licks. Suspension meant missing exams and a zero grade. So it was the paddle for all. She had three of them leave the office and return to the wooden chairs in the office to wait their turn. Cathy was first. Her Mom told her to bend over the desk and hold on to the other side. Without any ceremony, Cathy got five burning licks with the paddle. When she got up, her Mom reminded her of the long standing rule of if you get paddled at school, you will be paddled at home. This brought tears and “Oh please Mom, No. I will do anything”.

At the end of the school day, the twins were not in their usual hurry to get to the car. Cathy drove a little slower than usual. They did not say much. Their minds were laser focused on what would be happening a short while.

Mrs. Hardin decided to do some paper work that could have waited until next week. Then she chatted with two teachers about not much. She was taking her time and giving the twins plenty of time to sweat out what they knew was coming.

The twins were in their rooms when she got home. She busied herself in the kitchen prepping dinner. Then she called her husband and chatted with him. She casually mentioned she was going to paddle the twins in a few minutes. Of course, they could hear the conversation in the quiet house just as she intended.

“Mark, Cathy get in here. You know what to do, so let’s get it over with. I am going to give you both a dozen licks. So drop your pants and bend over the couch.” Slowly, with dread, they took their pants down and put their hands on the couch cushions only inches apart from each other. No time was wasted before the paddle was being firmly applied first to Mark for a count of six, then to Cathy for her first six. Then it was back to Mark for his second six. That’s when the oohs, and pleases started. Mark started to raise up and for that he got a lick on his leg which elicited almost a scream. Then Cathy got her second set of six.