The Valley Of Fire

We are traveling in our motor home from one fantastic place to another. Today we are in the Valley of Fire State Park which is about 50 miles from Las Vegas. Our first time here. This place has some fantastically colored and oddly eroded rocks. A wonderland of geology. Even in March, the weather is delightfully warm.

We arrived just before noon. We found a parking place that is U-shaped. High rock walls on three sides. Prefect privacy. For some reason, I thought of our decorative boat paddle which hangs on the wall. I took it down and we tried it out in our private canyon. The sound reverberated off the rock. I decided that it could be confused with driving tent stakes in the ground or splitting fire wood. Besides there was no one else around. So we took turns warming each other up with it. And it did exactly that and not just to our back sides. We hatched a plan to ratchet up our play the next morning. So with stinging bottoms we took a short scenic drive and were back for lunch. While Bacall was fixing sandwiches, I asked her to come out and give me some more pops. Well, she wanted more also. So we had lunch on stinging bottoms. Still we were thinking of delaying play until the next day - going for the teasing and anticipation factors. 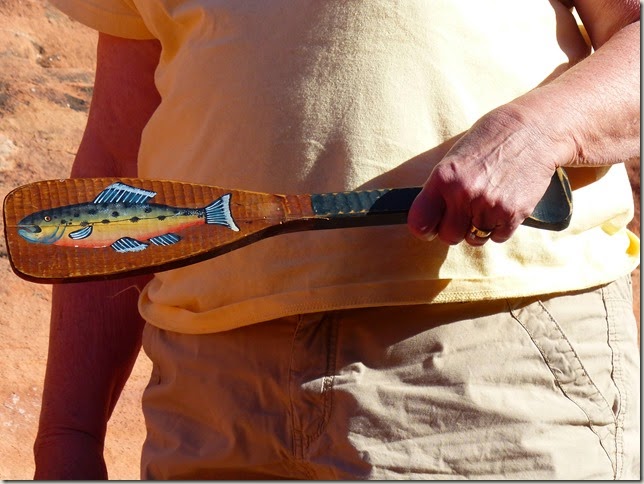 We wanted to rest for a short time before we took off to explore the park. That’s when our plan feel apart. When she took off her pants, I told her I wanted to paddle her. She was on board with that and I got her favorite holey paddle and started slow and easy for a few dozen licks, gradually upping the intensity. She started wiggling her naughty bottom around and I knew she was feeling quite randy. I used my left hand to fondle her and continued paddling with my right. I finally decided screw tomorrow we are going to do it right now. Our trusty vibrator was close by, so I slipped it on my left hand and continued to paddle her. Well, wouldn’t you know she came twice – rather loudly. Loud enough for anyone walking by to know what was up. Good for her.

When she came down off the ceiling, she wanted a piece of male tail. And I wanted her to have mine. I gave her our meanest stingy paddle. She said she was not going to hold back and I told her to go for it. After a few licks, I knew she meant business and was wiggling around. She told me to stay in position as she was far from though. I don’t know how many licks she gave me, but she sure had me on fire. Both back and front.

All in all, it was like we were 30 years younger. I think we will stay here for awhile, maybe the red rocks are rejuvenative?