I have been exchanging notes with a woman whose Mom had some spanking rituals that were used on her and her two brothers. I have no experience with spanking home spanking rituals. I got the switch a few times when I was kid and the belt a few times as an adolescent. I did the crime, I paid the fine. It was always spontaneous.

Her Mom made what she referred to as “spankers” which she made by sewing leather over a piece of wood. She made a “spanker” for each of them which was hung on their closet doors. 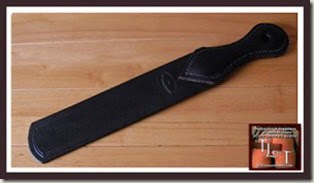 Unfortunately I cannot send you a picture of my original "spanker," because that little devil bit the dust  many decades ago.  Not sure what my mom did with it, but it didn't make the move when she sold our house the year I graduated from college.

The implement that we now refer to as my "spanker" is one W bought for me quite a number of years ago from the London Tanners.  It is pretty similar in shape, but not quite the same as the original, in that the business end of it is not an encased paint stirrer.  Nice thick leather and more or less same dimensions (possibly a little wider).  It looks uncannily like what my mom was crafting in a much more homely fashion back in the 1950s and early 60s.

It's the one they call "The Domestic Discipline Paddle," but it's more like a short strap for use OTK.  Very stingy.

She tells me that her “spanker” was made before it was first used on her. However, I like my fantasy image of the Mother making the spanker by the fire in the TV room, with the cat snuggled up by the fire, the whole family watching TV as she watched in dread as it was sewed up.

When her Mom decided a spanking was in order she would be sent to retrieve the “spanker” and bring it to her. I have no experience with spanking items being the house. I try to imagine what it would be like to be sent to fetch the “spanker”. I am sure it would have given me a cold chill as a kid. Now it would not faze me in any way. That’s a little sad, actually.

Email ThisBlogThis!Share to TwitterShare to FacebookShare to Pinterest
Labels: spanking