In my discussions with several hundred men and women that enjoy
spanking, not a one of them have said it was an acquired taste. It was
something fixed in them at an early age. There is no agreement for the
source of the interest as some admit they were never spanked or even
knew of anyone being spanked before their interest developed. For that
reason, I say you have the spanking gene or you don't. It may be been
repressed or gone unnoticed for half a lifetime or it may have been in
the forefront of thought since the person was five. 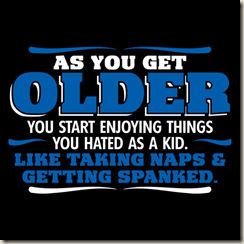 We all have variations in our interest. We are all tolerant of the
differences and seek to accommodate one another. Well mostly, I am.

For all but the very few true masochists, pain is not what it is all
about. For most, spanking is only a part of the larger dynamic of
submission. Some successful, in control people, like to give up
control to someone else, for a period of time, (which might be an
hour or less). They have a need to be told what to do and how to do
it. Bending over, (submission) and taking a spanking (more submission)
relives pent up pressure, even guilt for them. When the "scene" is
over, not only do they regain their power, they feel more energized.
An interesting conundrum - giving up control/power for a time gives
one more control/power. 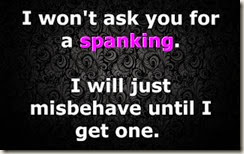 I am bypassing master/slave relationships as I have no interest in
them nor do I view them as emotionally healthy. I also pass on
discussing "brats" who are usually miserable types who are always
provoking a situation - seeking a spanking or at least attention.  I
think they need help, not spanking. As Bacall has long observed there a gulf between bratty and sassy.

In "Secretary", she did things to earn a spanking. The scene that did
for me was when she was bent over the desk waiting and looked back at
him. The look in her eyes was one I have seen a few times. "I have
been bad, I deserve to be punished, I am in position to be punished, I
will accept the punishment, I know you are doing it because you care
for me, I will pay for my sins and feel free afterwards".