Another from the vault by DME about a prissy ingénue attorney 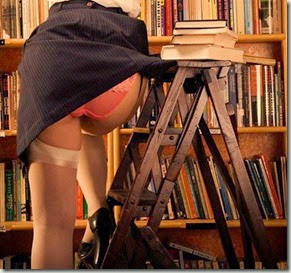 She hated it when she had to rush. If only she had remembered to file the motion last week. If only she had not stayed up so late last night chatting. If only she had not had to stop and buy another pair of panty hose on the way to the office. If only those case files had been pulled and ready to go. Instead, she was dashing through the streets, glancing constantly to avoid a cop who might stop her for speeding. She knew them all; any would let her go, but it was the delay she feared. The traffic light in front of the courthouse was barely long enough to pull on the new hose. She couldn't help it that the truck driver in the next lane got an eye-full- his lucky day!  Wheeling into a parking space, she leaped out and tripped up the stairs to the entrance. That was one disadvantage to wearing such high heels- tripping up stairs was tantamount to risking untimely death. The deputies grinned at her as she passed through the security checkpoint. The big fat one took his sweet time 'inspecting' her briefcase. She felt violated by the time he finished pawing through her belongings. The elevator was too slow so she dashed up the marble stairs, the clicking of her heels echoing in the great space. She knew she was late when she saw that the judge was already seated and the doors closed. The huge door swung noisily on its ancient hinges; no way to be inconspicuous. But she put on serious face and walked directly to her assigned table. A quick glance at the bailiff didn't garner his usual nod and wink. Instead he shot her a wary look.

Digging through her briefcase, she pulled out the file and settled herself in preparation for addressing the court. Judge Thompson had been on the bench for years. He enjoyed nothing more than shapely calves, delicate ankles, and high heels.  Not unexpectedly, she was one of his favorites. Their flirtatious banter was the fun part of her day. The actual proceedings of the court bored him and he was biding his time until retirement. A result of this ennui was that the court had gotten rather lax about formalities. Instead of waiting to be recognized, she strode to the bench to present her case. It was her usual time, after all. "I do not believe you have been asked to approach the bench."  In surprise she stopped and stared. Instead of Judge Thompson, another man occupied the bench. Disoriented, she knew that voice and face- Professor Davis! Only the most hideous of the professors at law school. The professor was famous for his criminal law classes, but more famous for his ability to cut down the most confident students; to reduce them to quivering mounds of Jell-O. What was he doing here?   "In Judge Thompson's absence, I have been appointed to this bench. It has become quite clear to me that all of you have taken advantage of his indiscretion to ignore the etiquette of the court.  Miss Carroll, I believe you are late.  Approach the bench."   Stay calm, she thought, Don't let the old goat rattle you. As a student, she admired his brilliant mind, and felt a driving need to impress him. He never acknowledged her success, but did grudgingly award her the highest marks.

Now he was staring at her down that long nose. "Are you prepared to present your motion to the court?"   "Yes, Your Honor" ( it pained her to call him that). Handing him the file, she stepped back. As Professor Davis reviewed the file, his bushy brows knit together and he frowned. "Miss Carroll, What is this nonsense?"  He pushed the file at her and she opened to the first page. Good grief!  The wrong file. In her haste to get out the door she had picked up the wrong case. Before she could stammer out an explanation, Professor Davis turned to the bailiff, "See Miss Carroll to my chambers."  Glaring down at her, "When I am finished here, you and I will have a little discussion about your performance this morning. You are excused."  She opened her mouth to protest, but the next case was already called. In stunned silence she gathered up her papers and followed the bailiff down the long hall to chambers. She could feel her face burning red. "Miss Carroll, I wish I could have warned you- Judge Thompson is mighty sick- they think he had a stroke. This fire breather has been giving all of us hell since he got here this morning. He's already on his third court reporter."

The familiar office now seemed different. The pictures on the wall were the same, the view from the window unchanged, but the very air was electric with anticipation. She glanced over the once cluttered desk- now spotless. Each item arranged precisely; the work of a perfectionist. "Old bastard probably spent the morning lining up everything with a ruler."   The usual office supplies were arrayed in tight formation, but one item, also precisely placed, puzzled her.   On the right side of the desktop exactly parallel with the edge, was a riding whip.

Posted by Our Bottoms Burn at Wednesday, November 26, 2014