Another from the vault by DME. She describes it from her POV. 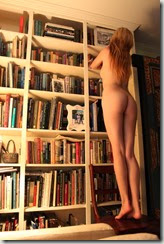 Sipping her gin and tonic, she wondered what he would do to her today. She had really been a good girl; hadn't screwed anyone, hadn't goofed off on the job, hadn't been particularly spiteful or sassy. My, I am getting to be one big bore, she thought. It did make her smile inwardly to remember the first time with him when she boldly told him to "eat shit" before the first stroke of the paddle. God, I'd never have that kind of nerve now; guess that's because I know what PAIN is. Almost as if he heard her thoughts, he stood and strolled over to her. "I think today we will work on submission issues. We've neglected that part of your training, I'm afraid. Here's the way it will be- no resistance, no refusals, and you might have some fun if you please me. The first glimmer of an attitude and I will paddle you without mercy, and then raise a crop of welts on your ass with the whip."   She wanted to submit to him and was relieved that there really wasn't a choice. No one could know how awkward it was to insist on being made to submit. Topping from the bottom, they called it.

When he reached down and clasped her arm, the first reflex was to pull away, or at least tighten up her muscles. But that would not be the best way to start this game. She allowed him to assist her to her feet and lead her to the bedroom. "Clothes off, and face down on the bed."  She complied, but slowly easing the lacy panties down just to be a tease. After she settled on the bed, he took out a thin limber switch. "No moving, no noise".  He began to lightly switch her legs, bottom, and back. It was only slightly stingy, and she relaxed a bit. Slowly he increased the intensity and continued to cover every inch of her. She noticed the strokes across her bottom were getting sharper than the rest. Soon she was having to squeeze a handful of the bedspread and bite her lip to stay quiet. The strokes began to lighten, and in a few minutes ceased. He stroked her and complimented her compliance. "Now I want you on your knees, ass in the air, and your nose on that bedspread. "  Assuming the embarrassing position, she begin to wish she had not wished for a lesson on submission.  Again he switched her and increased the intensity. When it was on the edge of causing her to squirm, he stopped and commanded her to spread her legs. Again he used the switch, but this time covering the inner thighs and landing the odd stroke deep in the crevices revealed. Again he led her to the edge of her control.

He left the room, but returned shortly. She could feel the fabulous sensation of a edge of an ice cube trailing along her now heated back. He slid the cooling ice all along the trails left by his switch. The feeling was a mix of cool, too cold, and delicious. He took his time. After anointing all the areas reddened and hot, he circled back to the tender areas. He touched the tight opening between her cheeks and was gratified to see her startled reaction. The ice was not more than a bit now and he slowly slipped it into her. He watched her struggle to maintain composure, and noticed that she was hot and wet.

He repositioned her on her back now. "Look at me." He knew she hated to have him watch her, and preferred to hide her eyes so that he could not gauge her reactions. But his dark eyes locked on hers. First the nipple clamps, and then his hand between her legs. Next the switch over her front and again between her legs. She had to concentrate so hard to stay still, and every now and then a whisper of a moan escaped. He couldn't wait to see how she would manage when he had placed the large butt plug and then applied the vibrator...