I discovered 13 stories in the vault this morning. Only two written by me, the rest authored by a talented dear friend of long ago. I will call her the Devine Miss E. We shared a decade of discovering what we liked about dominance and submission. Most of her stories are based on things we did or thought about doing. Her mind was quick and nimble – Mensa level. It was a pleasure to have known her. I will share her stories here in dribbles for months. I hope you will savor them as I do.

I don’t normally post dominate/submissive items here, so this will be a exception, showing a glimpse from my younger years.

The Surrogate by DME

She pulled into the parking lot at the hotel and paused a moment to get
her breath. She considered turning around and driving away, but knew she
couldn't.  His instructions had been very specific. The man opened
the door and gestured her to come in. Nothing in his expression gave her a
clue about his personality or character, but at least he didn't look like a
typical ax-murderer. She sat nervously in the chair he offered and in a few
minutes the phone rang. Instead of answering, he switched on the speaker and
a voice she longed for filled the room. "What are you wearing?"  No prelude,
no reassurance, nothing. She described her clothes. "And underneath?"  She
hesitated a moment, sneaking a glance at the man, but when the request was
repeated impatiently, she had to comply. Already she was dying of
embarrassment.

"My associate has agreed to serve as your disciplinarian. You will obey
him and respectfully submit in every way. Is that clear?"   She nodded, but
then realized she had to speak and meekly answered. "Remove your panties and
hand them over."  Frozen by fear and shame, she wanted to beg him to withdraw
his request, but hated for the man to see her do so. Resolutely she looked
away and reached under her skirt to comply, showing as little skin as
possible.  She held the flimsy bit of red silk out at arm's length, but
refused to make eye contact. "Now walk to the bed and lean over. Raise your
skirt and place your hands on the bed; it is time for your paddling." He
begin to list all the reasons she would be paddled, and that embarrassed her
more than the position she had to assume. Only he should know her innermost
failings. Before she could catch herself, she shot the man a surly look. What
right had he to be party to this? 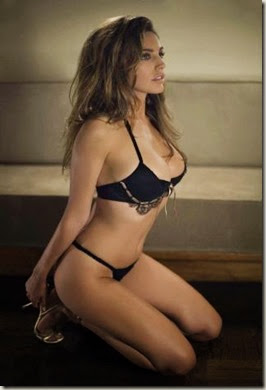 "I think we should start with four firm strokes."  The man picked up a
paddle and touched her; she jumped at the contact. Then she sensed him
drawing back and the paddle fell with a burst of pain. She dreaded him seeing
her express any pain, but by the third stroke she was crying out and leaning
away from the paddle as it fell.  "Tell me how that felt."   "IT HURT!"
"Did you try to move your bottom away from the paddle?"  In a tight voice she
answered, "Yes, Sir. But I couldn't help it".  "Couldn't or wouldn't?   Never
mind. You may have two more strokes to show that you will obey me and hold
your position."  She knotted the spread in her hands and bit her bottom lip.
She arched her back and when the first stroke fell, she moaned, but kept her
bottom high and ready for the next. A little sob escaped her lips with the
second, but more from the humiliation of the stranger's gaze than the pain.
It had taken her many months to be able to give herself to HIM in this way,
and now he ordered her to do so for a complete stranger.