I was paddled throughout my school years in both public and private schools. That was no fun. At home, I got the switch from Mom. It was terrible. A paddling in school meant a switching at home. The usual routine was that I was sent to cut a suitable switch and remove any buds and branches. Then it was pants off. She held my arm with her left hand and put the switch to my legs. I could try to escape but all that happened was that we went around in a circle. In the summer, we were in shorts so it was not necessary to take anything off. I can recall one time my cousins were visiting. We were playing outside and my Mom and her sister sat on the patio drinking iced tea and talking. There was a switch on the table and whenever we got into a fight or the like a few strokes of the switch would take our minds off the disagreement. 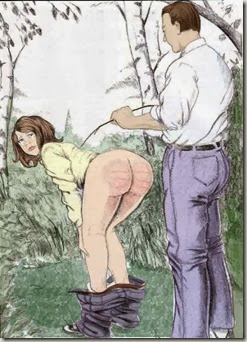 For me, the switch is my ultimate fear. I have never had an adult fantasy to relive those childhood experiences.

With some reluctance, I have used the switch on two women, at their request. One thought it would help her quit smoking. While I smoked her bottom with a switch 2 or 3 times, she continued to smoke. The other woman was even more of a pain slut and heard about the smoking cessation program and wanted the same treatment. She enrolled and greatly reduced her nicotine intake. She wanted to continue being switched, begging for a switching. Given my background I was not keen to accommodate her, but from time-to-time, I would tear her legs up. One time, I took her for a walk in the woods to select some switches. She was near giddy with anticipation. Before we left the woods, I had her drop her jeans and gave her maybe a dozen or so licks. She thought I was done. Imagine her surprise when later that day, I had her lay over the bed and used four switches at one time on her legs. She was striped and the bark from the switches was all over the floor. She was quite proud of her stripes and showed them off, which pissed me off.

After writing this, I Goggled and found I had already written most of these words before, back in 2010. Oh well, I need a post as I posted two items last week that I had intended to post this week.

Posted by Our Bottoms Burn at Wednesday, February 26, 2014

Email ThisBlogThis!Share to TwitterShare to FacebookShare to Pinterest
Labels: Memories