Once Upon A Time

Today is a very special post, a fictional story by Bacall. I asked her to write a f/m story and this is the result. I thought it was pretty good for a first effort. Of course, she knows all my hot buttons, such as bending over desks.

Being a female principal at a prestigious high school for the pampered children of the wealthy can be stressful.  I had to pass several rigorous test and interviews by the board of the school to make sure that I was capable of such a job.  Once the job was mine and I had proven my abilities, the board gave me discretion in the hiring of teachers and staff.  All employees have to have excellent references which are thoroughly checked out.  After all, you can just have any one exposed to these pampered teenagers.  We must all be firm, but yet flexible with our charges.

Sometimes, these almost young adults get too full of themselves.  They expect everyone to bow down to their wishes and demands.  It is hard to discipline this kind of student.  I must admit that on several occasions, I have had to resort to physical punishment to keep these students in line - both boys and girls.  The funny thing is that the students respect the staff.  Therefore, I have few discipline problems.

One things that I did not expect was discipline problems with a male teacher.  Don’t get me wrong, he is an excellent teacher.  He is very knowledgeable about history, but then he should because he does have his PhD, as do most of our teachers.  The students love him because he makes history come alive.  But, like the pampered students, he seems to think that he is in charge of the school.

I have had to call him into my office many times about his behavior.  The last time he was in my office, I told him that he would definitely follow my rules or I would either suspend him or paddle him.  He was quite shocked that, first I would question anything that he did and second, that I would paddle him.

Obviously, Dr. Wayne, the aforementioned teacher, thought I would never carry out such a threat as to make a educated, grown man bend over my desk, while I paddled him.

Obviously, Dr. Wayne, the aforementioned teacher, thought I would never carry out such as threat as to make an educated, grown man bend over my desk, while I paddled him.  It wasn’t a week later that Dr. Wayne once again flaunted my rules.  After the last classes of the day were dismissed, I called him into my office.  I gave him the option of either the suspension or paddling.  As it turns out, Dr. Wayne squanders his money and could not afford to miss a payday, so he opted for the paddling.

I lectured him on the importance of obeying my rules and went into my closet and took out the large wooden paddle that I keep for “special” cases, and he was certainly a “special” case. His eyes got very big, his mouth feel open and he blushed.  I know I should not say this, but I knew it was going to be fun for me.

Now for his next big shock - I had him lower his slacks.  I could tell that he wanted to refuse, but he knew that he could not.  He bent over my desk and I gave him six good pops then stopped.  I told him to stand up, which he did and reached for his slacks.  I told him “not yet”, that he had to take his underwear down. The blush deepened and he apologized profusely, but that did not deter me.  I gave him six more very strong pops until his bottom was a bright red.

At this point, I told him that it was over and he could pull up his underwear and slacks.  Without any prompting from me, he promised to never again disobey my rules.  I am happy to report that Dr. Wayne is now my highest performing teacher and he encourages all other teachers to obey the rules and perform well.

Men Bent Over A Desk And Paddled

Bend all the way over the desk and hold on to the other side and don’t move. 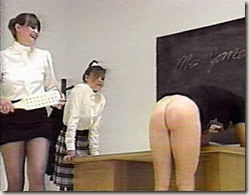 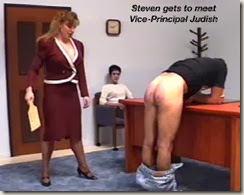 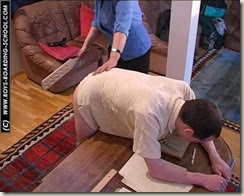 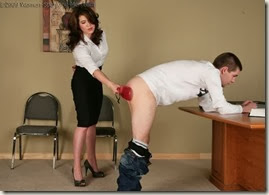 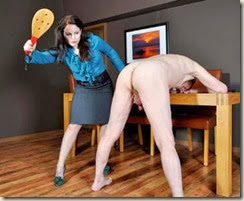 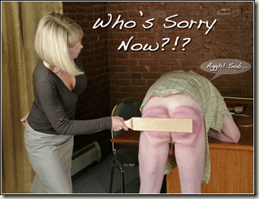