The male spankee is 40 plus, but through some warped worm hole, he shows up at the local high school as an 18 year old.

He is sent to the principal's office for a grave and repeated infraction. The principal gives him 10 paddle licks, the maximum allowed. However she is not satisfied.  She wants to really paddle him. Through devious means and a phone call to his home she gets him to agree to walk to her home after school for a proper paddling. There will be no limit on the number of licks at her home.

He shows up at the appointed time and is greeted by the principal's daughter. He knows her casually. He has a class with her, but he did not know who her Mother was. He is, of course, embarrassed, but she tells him she knows why he is there and he is not the first to endure her Mother's after school paddling's. They chat for a few minutes. When her Mother arrives she disappears.

In short order, he is pants down over the dining room table and she lays into him with a wood paddle. When he leaves, they both know he has been well paddled. [You can fill in the sounds of the paddle cracking on him, his exclamations and her admonishments to remain in position] 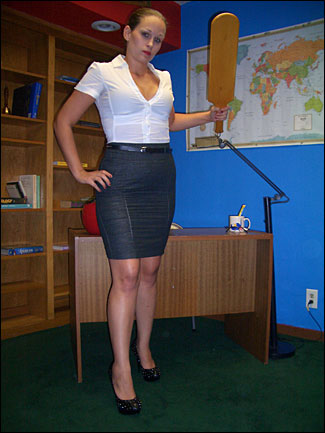 A real principal would not have a cardboard desk and she would be able to get to the desk chair. But, I do like her form fitting outfit.

Perhaps this is the story's female spanker on her home turf

Now it gets interesting. He chats up the daughter at school and they soon find they have a common interest - getting paddled turns them on. Not the bottom bruising type of paddling he got from her Mother, but more moderate sessions. They begin seeing each other on the sly and tentatively paddling each other. At first, the paddle is given over underwear, but it's not long until they both want it on the bare bottom. This leads to mutual masturbation. They get careless. They are on the sofa with bright pink bottoms. Their tongues are interlocked, she is fondling his jade stalk while he is paddling her pink canoe. [You can fill in the oos and ahs] Her eyes half-open, then open wide when she sees her Mother in the doorway watching. She sits up and he wonders what is going on. Then he sees Mama. Their clothes are across the room. They want to cover up, but they will have to get up to do so. They think they are in deep trouble. But, punishment is not on Mom's mind. She talks with them and it seems to them that she is OK with their behavior.

I wonder what happens next? Whatever it is, I am sure it will be fun and consensual. That's the way it is at OBB.

PS, you knew they would be switchy, this is OBB after all.