Not too long ago, a blogger or commenter on some blog wrote about being disappointed in the film Secretary because the character, Lee, had recently been released from a brief stay in a mental hospital. They felt that her background tarnished the character. In the writer’s estimation it made her not quite normal, not fit to portray spanking in a mainstream film. I will not disagree with that, but I will share some personal observations. 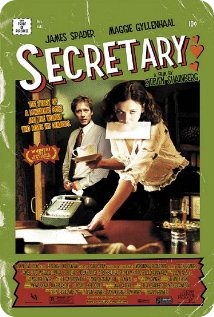 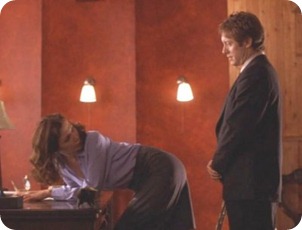 A lot of words have been written about this now decade old 2002 film. Before I get into it, I want to say we thought Maggie Gyllenhaal nailed the facial expressions. I will also say that I am not trained in clinical psychiatry.

We have known three women who were all highly submissive, deeply into the percussive arts, carried excess guilt and had been under physiatric care for years. So Lee’s background was not a surprise to us. In fact, it made her character believable. Lee may not the one you want to portray a spankette in a main stream film, but she was believable character to us.

I should mention that one of the three women was a “cutter” just like Lee. She had a fondest for the cane and single tail. If you can imagine taking a long hard paddling and then asking for the quirt then you know the pain level a cutter can tolerate. No, not tolerate, desire. And another of the women was a newly minted shrink, whose license to prescribe drugs was conditional on her remaining in therapy herself. She also had very high pain threshold and enough guilt to sink a ship.