Bacall writes: What a surprise today was.  I told Bogey that he would get a paddling - I needed to relieve his stress.  He told me that his stress would be relieved if he could paddle me.  I certainly was not thinking about that when I spoke.  While he finished his coffee, I went into the bedroom to make it presentable.  I took out one paddle, the Teacher's Paddle.  It has a lot of sting.  I took my jeans off and was ready when he came into the room.  He looked at me and said, "Only one paddle for both of us", with a gleam in his eye.  I said "Yes!"  I thought I could take maybe 8 swats if I was really brave.  So he had me straddling his leg and commences the paddling.  What a surprise to both of us - I didn't wimp out.  As a matter of fact, I was Miss Tough Fanny this morning.  After a dozen, he gives me a break and ask if I need more.  I said "sure".  By now he has a very big gleam in his eye and he is aroused.  I take another dozen - WOW! 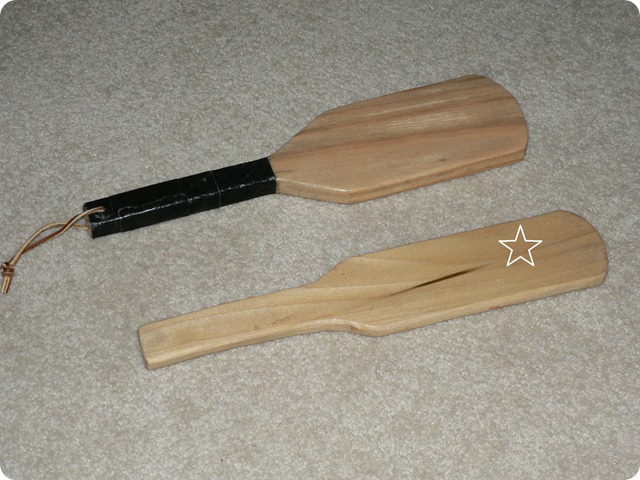 The starred paddle is the always reliable stingy Teacher’s Paddle

It is now Bogey's time.  I decide that he must take as many as he has given me, which I gladly provide!  He took his pops. He was not quite as tough as me, but he did take them.  He earned his reward and has had less stress today.  I wonder if I should repeat the process tomorrow?