The more I think about it, the more I think humiliation of a child of primary school age can be one path that leads being a spanko. I am not suggesting it is the only way and there is no way I can prove it even in my case. But, it seems reasonable.

In our post Why Do You Like To Be Spanked, it was advanced that fear and humiliation are so powerful they can become sexually linked. I know that I feared being paddled as a kid. I know that it was humiliating when other kids knew I was paddled. Consider that hormones that are released in the womb determine both physical attributes, the way are able to reason and how we are able to deal with life; it makes sense to me that hormones released due to fear or humiliation can also affect us after we are born.

In the second grade I got the ultimate humiliation. My in school behavior was not controlled by paddling so the teacher conspired with my mother and got a cloth diaper. When I acted up, she took me to the cloak room and put the diaper on me. Then I had to stand before the class and pull down my pants so the class could all see me in a diaper. Is that not one of the most despicable things you have ever heard? Not discipline, but child abuse.

After the guffaws settled down, I was taken back to the cloak room and paddled on the bare bottom. Of course the whole class could hear. Can you imagine having to see these same kids every day? Some of them through the twelfth grade? 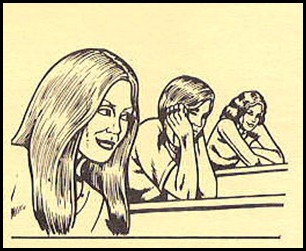 Did it cure my behavior? NO. I was ADD. But that was something that I did not know about until I was almost 40.

Can you imagine a good relationship with me Mother after that? Can you understand why to this day, I don’t automatically respect people in positions of authority the way you might.

I am finally old enough to admit this happened to me.

Posted by Our Bottoms Burn at Wednesday, February 22, 2012