Thanks, But I Really Don’t Care To See Your Hoohah

I came of age when Playboy was young. The girls were attractive, the parts were round and perky and everything was air brushed to exquisite perfection. Their plumbing was never depicted. A competitor magazine later did show full frontal nudity, but as I recall the legs were not spread and muffs were still in style.

It’s a new world now. I think every woman under 40 has her hoohah on the web. Usually with her legs spread, so one can imagine whatever folks who like this sort of thing like to imagine. I just scroll down.

I see this more and more on commercial spanking sites. Guess that’s why I retreat when I see it’s a commercial site. The situations are unreal, the women not all that attractive, they are being spanked for some flimsy reason, and spanked poorly. There they are with their tats and hoohah. Waxing gives women the adolescent look.

I will not be around when the now 25 year old woman’s kids find pictures of Mom with her legs spread. The kids will know for sure where they came from.

Curious to me is that women will show their faces along with their hoohah, but not their faces when being spanked. Explain that.

What is sexy to me 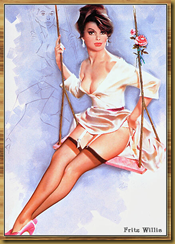