Being from the South, I guess no one should be surprised we all like paddles right? Most of us saw plenty of them in use at school or home growing up, even if we managed to avoid getting pops ourselves. Seems funny but reading different accounts it seems there are a lot of us who never got the paddle but saw it in action or even better, "heard" it in action and found something that fascinated us and caused more than just a little bit of seat squirming. I never got the paddle growing up but I sure fantasized about getting it from a few of my lady teachers at the time. I was a pretty good kid and rarely in trouble so the worst I ever got at school was a few licks with the coaches whistle strap.

You remember those? Back when I was in school it was popular to make various things out of thin strips of braided vinyl. The vinyl had a fiber core in it and I think it was some kind of craft thing originally but a lot of coaches had these long necklace type braided straps made to hang their whistles on. For less serious infractions, coach would line 'em up, bend us over and whip our butts half a dozen times or so with that whistle... MAN did that sucker sting! Nothing like the shock of getting the paddle but it did get your attention pretty dang quick.

Back to paddles... I guess the very first "implement" Mrs. Tex and I played with was an old ceiling fan blade converted into a paddle. I trimmed the narrow end into a handle, wrapped it with tape for a grip and yahooo!... instant paddle. Pretty good sting too, sort of similar to a ping pong paddle only with a lot more force. Of course it caught a lot of air so you couldn't get too carried away but back then we were just learning and our tolerances were pretty mild. I got quite a few early marital paddlings thanks to the Bahama Ceiling Fan Company... guess I should send a thank you note someday, huh? After that we went shopping and bought a kitchen tool that made a heck of a OTK paddle. I don't know what it was for but it was about 14" long with about half of that handle. The business end was wide and mostly oval but tapered down some at the tip. It was about a 1/4" thick but made from a fairly hard wood (maybe birch?) so had a terrific ouchy sting. Real  butt blazer too because it always seemed to make for a really red bottom! I guess it was for stirring something but the paddle end was probably 5" wide or so at the middle. I really liked that paddle a lot and was truly sad the day it split in half... but it went down swinging as it were. 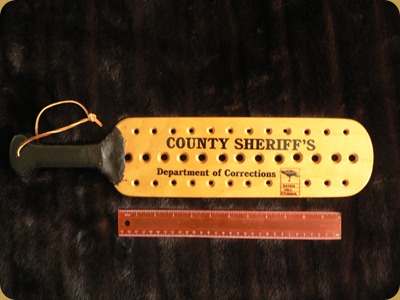 We bought a thin Fraternity paddle from Michaels craft store probably thirty years ago (man time flies, huh?) that we still have (and use!) to this day. It's not a "real" paddle as it's totally flat edged on one side and made for pasting letters or designs on. It's made from a dark hardwood though and has plenty of good sting being only about 3/8" thick. Mrs. T still enjoys paddling me with it every now and then and I can vouch that is hasn't lost any of it's sting. Most of our paddles are thin and stingy which is what I like most. I don't have any that are thick and to be honest, the thuddy toys we have are mostly leather. I do have a leather school paddle from the old Ecstasy Leathers outfit that we call "The Principal". For a leather paddle, it has a big sting factor with some heft so is a little thuddy too.

On the homemade front, I've made a couple lately that are keepers out of wood picked up at Lowes. One is a short OTK maple paddle, about 14" long 3.5" wide on the business end. It's got about 8" of business end so won't cover both cheeks with one swat but is really a good size for spanking each cheek in turn and then working the sit-spot area. This one also is seems to paint really nice shades of red pretty quickly. I also made a longer, maybe 20" paddle with the same 3.5" wide business end out of poplar. Haven't stained that one yet... am tempted to just put a light oil finish on it. Really don't want to change the character or feel of the wood with a polyurethane or clear coat. I'd like to keep that sort of coarse, open surface texture. One of the nice things about poplar I've found is that being somewhat soft, it seems to have a nice dull sort of burn factor... somewhere between sting and thud. Since it's softwood and would probably break, you can't  really swing too hard but then for the level I usually enjoy "bare bottom" wise it's not a bad choice. Probably one of those you just have to plan on making more than once for replacements. 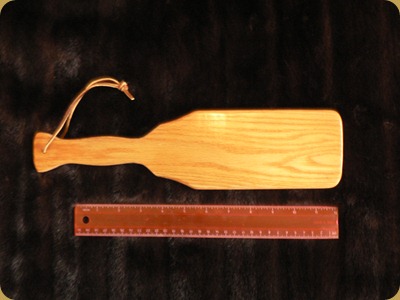 On my to do list is a really nice Spencer Paddle, both a full sized and "Dana" sized version. Dana Specht has a pocket Spencer with holes that is super stingy as well as the full on butt burner size for naughty boys (I've been spanked with both by the way and they're highly memorable!) I like the ones she has which have the smaller, 1/4" countersunk rounded holes drilled in rows down the blade. They're made out of solid core 3/8" birch plywood I think which means they're light but very hard. I don't know if you visit his blog but Ken at Spanked by My Lady has made a couple of very nice full sized Spencer’s that I'd like to emulate when I get around to it. I'd also like to try a few from ash, hickory and a few other light but hard woods. Your and Bacall's birch paddles look nice though the Teacher would be my choice too for sting rather than thud.

Email ThisBlogThis!Share to TwitterShare to FacebookShare to Pinterest
Labels: paddles