One of the first lasses I spanked, Carol, wore tight white shorts. Her shorts had legs about one inch long. So there was plenty of  sweet tender thigh to admire. She had several pair of of these shorts or they were washed very frequently as they were a mainstay of her summer wardrobe on the river. She was petite, with small perky breasts and blonde hair or at least the tresses on her head were golden. I wanted her. She was likely virgin, I know I was. We were both 14.

There were six of us that spent the summers on the river who were all about the same age. We spent most of day on the water, swimming, skiing and goofing off. At night, we gathered on the pier that was 30 yards out in the water – far enough out that adults could not surprise us. The talk was racy, but other than a few stolen kisses nothing much happened.

This changed when Becky’s uncle moved his Century Resorter to her parents boat house and Becky got boat privileges. WooHoo! While we all had run-a-abouts, this was boat had class. None of us could take a boat out at night, but Becky could. And her uncle was generous with gasoline. She must have filled up the tank at least daily. Of course, gas was only about 35 cents at the inflated prices on the river. So a fill-up was about $15. More than we could pool in a day. 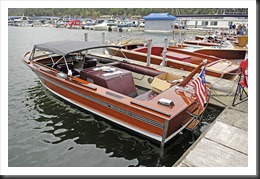 Looking pretty much as I remember the boat

So with some fine talking, promising and lying by all of us, we soon were drifting in the middle of the river at nights, instead being pier bound. We had it made. And we could get beer where we got gas, so we were able to keep our thirst quenched.

We had always dressed up a bit for our evening activities, even it was only sitting on the benches at the end of the pier. But, we now started wearing swim wear under our clothes, so we could swim in the cool water of the middle of river. This also led to increased contact with soft female skin in the moonlight far from the eyes of our parents.

Life was getting better.

One evening it was Becky’s birthday and someone else, not me, decided to give her birthday spanks. So Becky was given a few spanks by all of us, I think two other girls and the three of us knuckle-dragging guys. She did not fight at all, but gracefully bent over the engine compartment and accepted her spanks with equal grace. Now Becky was a looker, buxom and all that, but it was Carol that I had the hots for. And in our youthful exuberance it was soon determined that all the girls needed a spanking and soon Carol bent over the padded cover with her tight white shorts radiating the light of the moon and stars.

Not Carol, or anyone I know, but some fine white shorts

I did a sorry job of spanking her as I was more nervous than I had ever been in my life. There in front me, encased in white, was the object of two months of serious adolescent interest - her bottom willingly presented for my palm. And I could only do a half-hearted job.

I wish I could relate that I made up for that night with her, but it never happened. It was not the last spanking in that boat however. And burned into my wee mind that night was a life-long obsession with wooden speed boats and tight white shorts.

This memory was brought front and center by a remembrance of Dave Wolfe.

Email ThisBlogThis!Share to TwitterShare to FacebookShare to Pinterest
Labels: Memories