Several Blogs have recently posted about men wearing panties. I knew I had written about the subject several times and I plan continue the subject. I hope other Blogs will do likewise.

Using the word cloud in the right margin, I checked to see how many posts were about men wearing panties. I was surprised to find there were 9 posts on the subject.

So making an easy post for the weekend, here they are in chronological order.

PS Right now, Bacall has on a girdle that looks like this one. It’s sheer,  I can see her bottom redden while I paddle her. And that’s going to happen in just a few minutes. 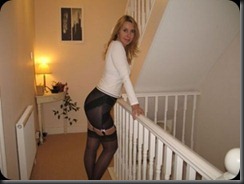 Oh, I have on a light control black panty girdle, which she will take down before she paddles me.

Posted by Our Bottoms Burn at Saturday, November 20, 2010

Email ThisBlogThis!Share to TwitterShare to FacebookShare to Pinterest
Labels: spanked in panties