So you want your wife to spank you?

Several times in the life of this Blog, men have commented that they admire my good fortune in meeting a woman like Becall who enjoys spanking.

I agree I am lucky to have Becall, but not just for that reason. Besides, there are MANY women who want their bottoms paddled.

I did not declare to Becall my fascination with spanking until after we were married. Sure I gave her playful pops from time-to-time, but I was not honest with her before we said our vows. So if I am lucky, it is that she turned out to share my interest.

I suppose any rational person would agree that a spanking interest is something that should be discussed before marriage. I wonder how often it is done?

So you did not mention it before marriage and now her interest in spanking you does not match your interest in bending over. What can be done?

I am positive that more men could get spanked by their wives, if 1) they would go about it in a straight forward way. Write her a letter and let her know exactly what floats your boat. Keep in mind that women know more about role play than you ever will. While you were smashing your GI Joe’s with a hammer, she was playing house and her dolls were stand in’s for some very complex adult characters that sometimes needed a spanking.

2) Do something for her that she wants. I don't mean furs and jewelry or even chocolates and flowers. You will have to think beyond tangible gifts. "What does she really want?" It could be she would like to spend more time with her Mother or have you cook a meal once in awhile. It will have to be something that you should have been giving her all along if you were not so selfish. Oh yeah, it can not be quid pro quo. This has to be something that you do and never ever mention, much less ask for something in return. You just do it with love.

After you have done this thing for a while, I would be surprised if she did not spank you more often. You did write that letter didn’t you?

Try it and see if you get to this situation. 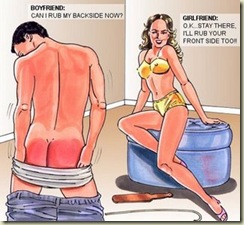