I think anyone that enjoys being spanked, has spanked themselves at some time. I know I did – when I was young and without a partner.

My technique was to use a long handled bath brush that could reach both cheeks with either hand. I would stand and deliver swats to myself as hard as I could. They were never hard enough. My bottom would get numb before I was satisfied.

Of course, the paddling always made the blood flow a little more and Mr. Happy would get so hard a cat could not scratch him.

I am sure my jaw dropped the first time a woman told me she spanked herself. My gosh, women were doing the same thing I was doing? She told me about the locked box that held her paddles and vibrators. She told me that she would get on her hands and knees on her bed and pop her backside with a paddle. She must have done a good job, because she sure could take whatever I gave her and ask for more. 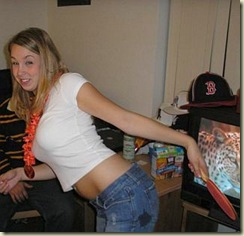 I Goggled self spanking and was actually surprised at the number of personal accounts. Here are a few links, if you are interested.

Tiggr, Patty, Pixie, Ash Self Spank Videos, and a self spanking video with a bath brush. I am not at all sure of the sex of the spanker/spankee. Guessing male. Looks like he? is just trying out the brush, since it still has the tag on it.

PS Several times I year, when I tell Becall I am going to paddle her, she tells me not to bother she will do it for me. She will get a paddle, bare her bottom and wack away. I like to watch her and she knows I do. She does a darn good job. But in the end, I give her a hand.

Email ThisBlogThis!Share to TwitterShare to FacebookShare to Pinterest
Labels: Self Spanking