While stories of paddled sorority pledges were of significant interest, my favorite “case studies” were in the marital spanking section, especially those about couples who switched and spanked just for erotic purposes. I had no idea I would soon meet a young woman who would share my interest. My number one story was about Ed and June. They were dating when she was under going pledge training. Ed was interested in hearing about the paddlings the girls got and June discovered she was “more ardent when my bottom was still smarting and prickling from the paddlings dished at the hazing sessions”. Soon enough, she was over Ed’s knee for smacks on her skirt prior to all their necking sessions. [There’s a word from yesteryear] After more dates, her tight-fitting skirt came up to reveal the tops of her stockings, white thighs and trim pink panties. [That brings back some fond memories for me]

Well wouldn’t you know it, after about a year of dating, we find out that June decided Ed should get a dose of his own medicine. She got her sorority paddle, bent him over and acted very bossy as she put the paddle to him. Ed revealed that “the paddle stung smartly through my clothes in a very stimulating way and I was quite a bit embarrassed by the reaction which I couldn’t conceal when I straightened up”. [You too huh Ed] June relates “ I pretended not to notice the big lump in Ed’s pants afterwards, but I was delighted”. Through the remainder of their courtship, they rarely had a date when Ed didn’t get the paddle and June did not get his hand on her panties. [How sweet, they saved themselves]

It concludes, “With this spanking background, we could hardly wait to give each other a bare bottom initiation on our honeymoon. On the first night at the motel I promptly went over Ed’s lap and blushed hotly as my skirt was lifted and my panties were lowered to my knees. I nearly melted as he gave me my first hand spanking on the completely bare bottom. Afterwards, when I was down to my garter belt and hose, I initiated Ed. The promising curve he presented as I lowered his shorts for him indicated that things would be very interesting later on. He bent over the side of the bed and I showed him what the paddle felt like on the bare bottom. [A promising curve is what it’s all about]

You want to hear about Alan and Jackie? 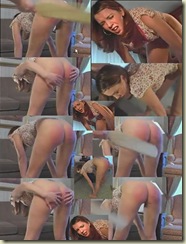 Posted by Our Bottoms Burn at Saturday, November 07, 2009