Give Me A Break

A popular, but now defunct spanking blogger, recently related his adventures at a spanking party. He had never attended a party and this was a f/m only event. He wrote candidly about his experiences and was not always complementary about the other people. That he ended his Blog telling others to NEVER EVER reveal their true identity, leds me to believe that some at the event took exception to his whining and maybe were going to show up at his home and kick his butt?

BTW, we have been to dozens of parties. Hundreds of people know our real names. Being outed has never been a problem for us or anyone else we have known.

He wrote about one woman who approached him to make a date to spank him. He wrote that he had seen this woman beat another man and did not care for her style. My response to someone that I do not care to play with would be, Thanks, but no thanks. His reply was Is this consensual? What??? Someone you do not know asks to beat the hell out of you and all you want to know is if it is consensual or not. Give me a break. Being submissive does not require acting as a doormat.

This lass seems to be engaged in a consensual activity. You be too. 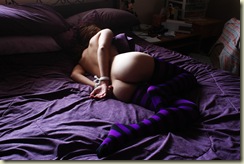