I wanted it, I needed it and she gave it to me 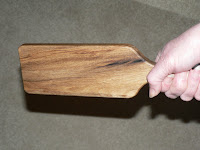 Becall had surgery the first of December and only yesterday was her pin removed. This, of course, has dampened our spanking and sex life. It has been difficult for either of us to really enjoy sex, when a slip could cause something to contact the pin.

So we were both quite disposed to resume normal activities. She was not confident that her frame of mind would allow her to enjoy bottoming. So I was selected and I was fervent to assume the position.

Let me back up a little. Yesterday, she saw me putting on a pair of black silk boxers that she had bought for me some years back. I don’t wear them often and when she saw them she got a gleeful look and reached for a paddle. You have to humor a woman recovering from surgery don’t you? She wanted me to put on the same boxers for play today. And so I did.

We both spend more money on underwear for the other than we will for ourselves and these boxers were no exception.

Back to today. I was feeling bullet proof, so I pulled out the heavy artillery. Let me say now, that six hours later, I am sitting with care. Sometimes, you get what you want.

I got out two OTK weapons; our red paddle and our myrtlewood paddle. Both are joint use paddles. The red was our first paddle and it still packs a sting. Becall bought the myrtlewood in Oregon two years ago. It looks like a mini cheese board, but we suspect it was really designed for what we are using it for. Becall thought it was so cute and could not wait to try it out. She says it spells STING.

She likes to have me OTK, so I offered her either paddle. She choose the myrtlewood and toasted me with two dozen hard and fast. Then the fun began.

She gave me 20 on my legs with the wood batten. I really hate to admit that I like the batten, but I do. Next came about a dozen with the principal’s paddle. It is a moderately heavy one that gets to the deep tissue. Finally, she gave me 20 licks with the incredibly stingy white pine paddle. It stings the surface. Using a heavy paddle followed by a lighter one is like getting two paddlings. I was doing some deep breathing and I was hotter than a firecracker by the time she was finished. Oh yeah and my bottom was white hot.

We then engaged in some frenzied friction motion. I was delighted that Becall came with one of her primal screams. It had been a long dry spell for her.